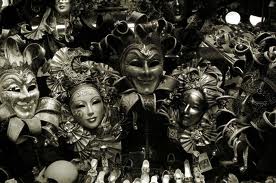 Whether they come from this world or another place entirely is uncertain, for they are difficult to engage with any lucidity if at all. Few live who have seen their faces to vouch for their humanity.

Little is known of these sequined spiral dancers for their motivations are inscrutable.  What is certain is that they possess an otherworldly air and detachment, and that they are some of the most dangerous opponents engaged in the great game that surrounds the Shining Trapezohedron.

No. Enc.: 1d12 (2d10)
Alignment: Chaotic
Movement: 150 (50)
Armor Class: 4
Hit Dice: 4 + 1
Attacks: 1 ranged or melee, by weapon or special. They usually use blades but these may be any kind from daggers to greatswords. There is a base 25% chance that each melee weapon is equivalent to a +1 weapon and a 5% chance it is +2.
Damage: By weapon or see below
Save: F7
Morale: 10 if the objective seems obtainable, if it becomes clear that no effort can succeed they will leave.
Hoard Class: custom
XP: As Ogre Mage

Harlequin Outfit.  Gives the wearer the effect of blur. Killing a Harlequin might damage the suit.

Harlequin Razor Pistol.  The antique looking firearms have an ammunition capacity of 2 or 3, do damage 2d6 and look very John Blanche.
Posted by Calum at 16:14 7 comments:

I really like the surprise mechanic.  Though I’m not normally one to tinker with mechanics too much I’ve been thinking about tone appropriate mechanics for my Space Trash TM setting.

Normally each party in an encounter has a 1-2 in 6 chance of being surprised; easy. (I love it when both parties are surprised, it leads to some great comedy). It’s a really simple way for determining how encounters begin and is easy to modify to get a sense that one’s character is a perception ninja without having to get into skill systems as I will describe.

Things that make you harder to detect (but not undetectable) increase the chances of the other party being surprised by one step.  The Ranger is good at sneaking around unnoticed so is more likely to surprise foes.

Other conditions may modify this, which may be magic, tech or skill. For example a Chem Ranger wearing motion-detecting goggles further increase his chances of detecting foes first, which reduces his chances of being surprised one more step from 1 in 6 to 1 in 8.

*I’m considering a new house rule that assassins get the same ability to surprise opponents as a ranger (this does not change he assassin’s chance of being surprised however).  Combined with the d6 hit points it may be time to step their xp up to the next bracket.

**This would potentially be an improvement on the WhiteStar Pilot, the abilities of which are too similar.
Posted by Calum at 20:40 6 comments: